Rondal Partridge is the last surviving member of the original all-star first team of 20th Century American photographers. You can learn much more about Ron at his website.

I first met him at his home several years ago, when Ron was in his early 80s. Since then he has published a terrific book full of quirky, idiosyncratic photos, and had several important exhibitions of his collected works.

He is light of step, quick of tongue, sharp of wit, and a whole load of fun to be with. Barbara and I ran into Rondal Partridge at a Tuesday Derby Street Farmer’s Market in Berkeley. Ron made wisecracks about my Fuji digital camera, and about color photos in general. We quickly became reacquainted, but he’s “way too busy” to make himself available for any personal schmoozing during our return visit next July. 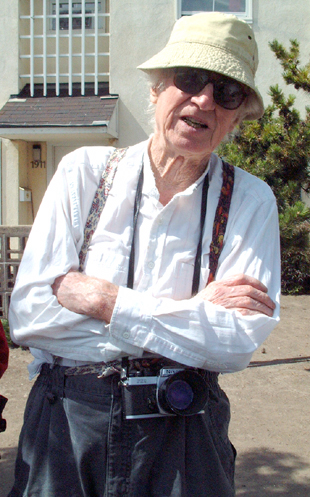 A few days earlier we attended a delightful community youth theater performance in Petaluma, one hour north of San Francisco. Our young friend Nadia played the character of Ultraviolet in Cinnabar Young Repertory Theater’s original “Wonderville Wonders,” which was a blast from start to curtain call. In this photo, Ultraviolet is the cute one in the middle, just to your left of the actress in colorful red costume. 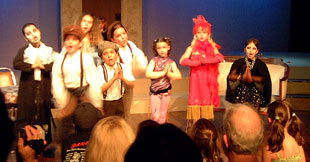 As an early birthday gift, Barbara surprised me with a scary and exciting half-day class three rapids raft trip down the North Fork of the American River, near Placerville, in Gold Rush country. Our first-rate guide, Danny, poses with Barbara in front of a stack of inflatable rafts from his employer, Tributary Whitewater Tours. Next year we’re aiming for the Middle Fork, with class four rapids. Wish us luck! 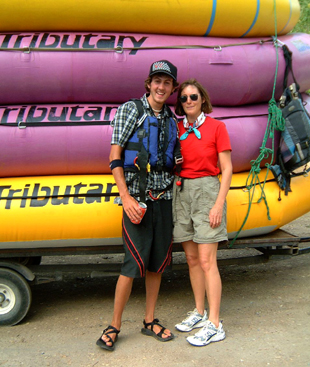 Architect Frank Lloyd designed the massive, strange Marin County Civic Center in San Rafael, late in his career. Steps take visitors up to a gallery deck with splendid views of the building and surrounding communities. Rising from one corner is this semi-Oriental tower, which can be seen for miles in every direction. 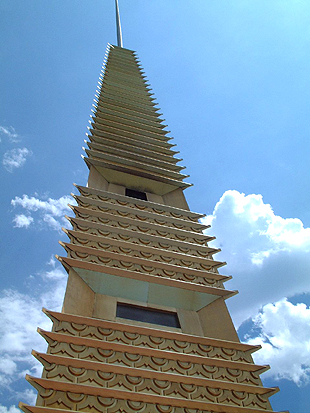 Our final California stop was back in Los Angeles, where pal Kurt took me on a gusty bicycle ride from his Palms neighborhood out to the Pacific Ocean. No smog that Sunday! Our route was along the channelized Ballona Creek, shown here curving behind me as I lift a bicycle over a barrier. The smile on my mug is genuine. 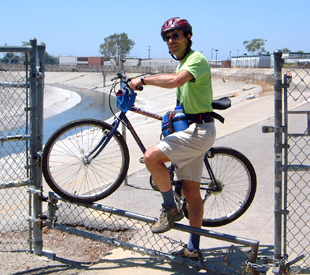 What will I remember about the Bay Area? From downtown San Francisco the Bay Bridge to Oakland and beyond looms massive and loud overhead and into the distance. Weather changes constantly, from bright and sunny to moody and foggy, then to something unexpected. CaliPhoto#2 featured the famous Golden Gate Bridge, so let’s give a farewell glance to its solid sibling, seen here from the Embarcadero near Ferry Plaza. 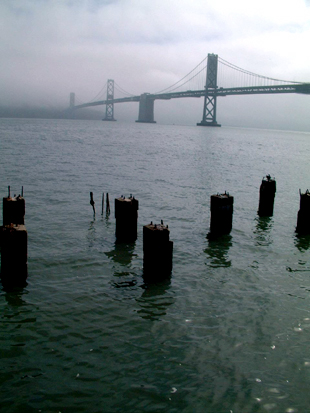 Thanks for coming along on our annual visit to California. The trip was great, and I appreciate your companionship. 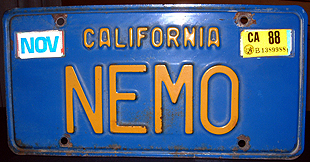