I admit it; I am an iMovie apologist. I think it’s the single greatest program ever made, with the possible exception of that puzzle game that came with OS 7.1. My fondness for iMovie compelled me to use it…a bunch. You use anything enough and you start to see limitations, I wanted better text control and audio where I could see the waveforms. Why? Well the titling in iMovie is nice but you don’t have the control you sometimes desire and the audio control isn’t exactly stellar. I’m not trying to be negative about iMovie, I still think it’s great for beginners but as you get more proficient you’ll want to step up.

For most folks stepping up means the three hundred-dollar trip known as Final Cut Express. Three hundred bucks is pretty steep so I decided to look for alternatives. I found one in Montage by Arboretum. This nifty bit of movie making madness will only set you back $149 US dollars, half of Final Cut Express. I’ve never used Final Cut Express so I can’t compare the two directly but I can say I can’t imagine what Montage doesn’t have that I need. Hey how about a screen shot? 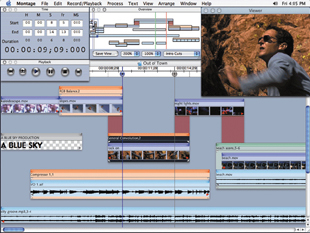 Looks confusing. The first time I fired up I shut it down in abject horror at everything going on. Steeling myself I fired up Montage a second time (some weeks later, my computer had gone to the shop) determined to try to a bit of video editing in Montage. My perseverance paid off very quickly, it turns out using Montage wasn’t half as difficult as I expected it to be. This is going to hard to explain but you have a window with your project living in it. At first the window seems impossibly tiny and of little functionality but another pane gives you control over the size of the window. Keep it tiny for gross editing and make it monster sized for fine tuning even edit frame by frame. Really a very nice system similar to, but much more controllable, than he timeline in iMovie.

Back to the two things I felt iMovie was lacking: Audio control and titling. The audio control in Montage is fabulous; you can edit the actual waveform that is very nice. Try to get rid of a popping sound in iMovie and it’s a tough task, when you can see the pop on the waveform its no problem at all. The audio editing capabilities don’t stop there… well for me they do because a lot of the other stuff is far too advanced for the puny amount of gray matter I have left to comprehend. Suffice it to say you can use it to get rid of that annoying camcorder hum and just about anything else you need to do. The titling is much nicer than iMovie’s, or at least much less constraining. By that I mean you can’t screw up a title too bad in iMovie whereas Montage gives you the freedom to be really creative with the titles. The net effect being: you can churn out a really great or horrifically bad title, it’s completely in your hands.

If you decide to purchase Montage (and there is a free demo available) be careful. Part of the Montage protection scheme is computer specific so buy it on whatever computer you intend to use it on. I learned this when my iBook went to the shop and came back with a new motherboard. Monage refused my identification key and left me fairly flustered (keep this in mind if you’re planning to get a new machine anytime soon). Luckily the people at Montage are prompt and helpful and the problem was solved pretty quickly.

A review wouldn’t be complete if I didn’t get the technical stuff out of the way. Montage can import the same file formats as iMovie so no worries there. The program will also export your footage as .dv, .mov or straight to your camcorder, again just like iMovie. I ran Montage on a 600Mhz iBook and it seemed pretty speedy. I had intended to try it out on my G4 desktop, to give it a speed test against iMovie but as previously mentioned the registration key is one computer only. I ended up running iMovie on my iBook and while a direct comparison is a little difficult Montage felt a little faster than iMovie. You might want to keep this in mind if you’re planning on buying a new computer soon. Montage is delivered via a 12-MB download. It takes a day or so to get your registration key. On a side note: I am really becoming quite enthralled by downloadable software, beats slogging out to the local CompUSA and looking at the three non game titles they carry. The help in Montage is a feature I didn’t explore to deeply (wasn’t necessary) but in the brief look I had it appeared to be adequate.

I recommend Montage without hesitation to anyone who is feeling a bit constrained by iMovie. The wealth of features will keep you learning about movie making for quite some time (learning is half the fun). I wouldn’t recommend Montage to anyone who is just starting to work with digital video, it will seem too complex, but the second you feel constrained by iMovie (remember constrained not befuddled) give Montage a serious look.