Today before breakfast I was reading the MacAddict magazine review of a CD-RW burner while waiting for some toast to heat up. I thought to myself, “Hey, Nemo, I wonder if LaCie will be providing this 24x model for our evaluation any time soon.” At that moment my electric toaster made an awful ratcheting noise as two slices of whole wheat bread burst into flames. All the power went out in my house, and I knew it was time to replace the toaster.

Yes! A large box from LaCie awaited me after I returned from buying a new toaster at Target. With careful excitement I removed the inner LaCie carton, containing both FireWire and USB cables, power cord, User’s Guide with registration card, three blank 700 MB Verbatim CDs, an installer CD, and the handsome 24x10x40 CD-RW drive. It is a very substantial and stylish piece of hardware, with brushed silver body and attractive blue front panel.

The comprehensive User’s Guide begins with many precautions, which should be read and followed! Ditto for copyright law info. This manual explains LaCie’s trademarked “U&I” snappy shorthand for both USB and FireWire (IEEE 1394) capabilities of this burner.

I studied the installer CD’s useful ReadMe document, then installed Roxio’s Toast Lite v5.0.2, which is offered in English, French, German, and Japanese. Another helpful ReadMe was part of the Toast Lite installation process, which placed application, extensions, help, and audio extraction items onto the hard disk of my iMac DV, and relocated a couple of existing Apple extensions. Restart.

I plugged in FireWire and power cables, then turned on the power switch located at the rear of the unit. A tiny green light started glowing above the CD drawer, and the moderately quiet fan began to purr.

The disk drawer opened when I pressed its round blue button, bottom center. To test the LaCie, I inserted a commercial audio CD and gently pushed the drawer to shut it. With additional fan noise the music disc worked without incident, as did a data CD full of archived applications. You can drag a disk’s icon to the trash to eject it, or press COMMAND-Y to “put it away,” in Macintosh terminology. (I use “disk” to describe the physical media and data storage media, and “disc” for a music CD.)

I wasted over an hour attempting unsuccessfully to use iTunes 2 to burn a music CD. I was repeatedly told “authoring support not found,” which is either due to a bug in Toast, in iTunes, or because LaCie’s U&I FireWire & USB 24x10x40 CD-RW Drive is too new for even the updated Apple OS 9.2.1 extension called Authoring Support 1.1.3.

I finally got it into my thick skull to use the included Toast Lite for authoring software. It works perfectly!

In fairness to LaCie, the User’s Guide advises that if “the CD-RW Drive Is Not Recognized: use the Extensions Manager to verify that the drivers have been installed. Is there a conflict with other device drivers or extensions? Remove the conflicting driver or extension. If you are not familiar with the procedure for this, contact LaCie Technical Support.”

After launching Toast Lite I dragged a large folder full of .mp3 music files into Toast’s Audio window and clicked “Record.” Bingo! A few of the songs needed to be converted, which happened automatically, before I elected to burn my first CD at 24x speed. I made note of the time, and came back in a few minutes to find the burn stalled by a “buffer underrun error,” whatever that means. I was advised to “please try again with a slower write speed.”

No dice, Mr. Toast. What’s the point of having a 24x unit if it can’t handle the advertised speed? I tested the partially-burned CD, and its three complete songs sounded great. I decided to think different, and make a 700 MB data disk at 12x for insurance. My drive breezed through the process in under seven minutes. (This is why you often read that a 24x CD-RW can burn an entire disk in three minutes.)

Feeling reassured, I prepared to make another Toast Lite CD of those .mp3s, and this time I checked the “buffer underrun protection” box before commencing. Hooray! It worked, requiring thirteen minutes to cook over 58 minutes of music.

I had used my three complimentary blank CDs, and needed more. At the local CompUSA, I purchased 25 blanks of their 24x speed house brand in five different colors for $9.99. Back home, and grinning from ear to ear, I used Toast Lite’s Copy feature to dupe a 62:17 minute commercial music CD in twelve minutes.

TiBOOK TO THE RESCUE

David Weeks dropped in to have a look at the LaCie, bringing his Titanium PowerBook running OS X. He was perplexed by my inability to use iTunes 2 as authoring software, and decided to do some troubleshooting.

David’s TiBook succeeded immediately, using OS X (10.1.1) to make music CDs from a load of .mp3s both with iTunes 2 and his preview OS X version of Toast Titanium. But the 24x LaCie drive was supported only at 12x by iTunes. Roxio’s web site will have current info on the status of X-compatible Toast software as it becomes available.

Still in troubleshooting mode, poking around my OS 9.2.1 System Folder and comparing it to his, David activated these extensions: Authoring Support 1.1.3, Disk Burner Extension 1.0.2, and FireWire Authoring Support 1.1.2. Bravo, because iTunes 2 now worked as authoring software on my iMac.

Something clicked in my brain, and I remembered a message that appeared during the installation of Toast Lite, many hours earlier: 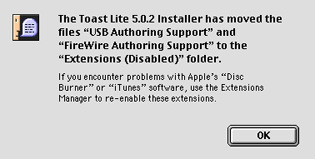