It started about a month ago when a friend of mine, Tad, bought a guitar. He did not know how to play it, but said, “I had always wanted to play.” This reminded me of a program which we had reviewed right here at MyMac.com, a CD-ROM based guitar learning program titled eMedia Guitar Songs Vol. 1. I told Tad about the program, and he went and picked up eMedia Guitar Method 1. (Works on both Mac and PC.)

That was on a Friday. Monday at work, I asked Tad how it was going. “The program really works! I learned more than I thought I would pretty quickly. Thanks for recommending it.” High praise indeed, coming from him. Tad has high standards in software, and anything that was impressive to him, I knew, would have to be a good program. This gave me hope as well, for you see, I, too, had always wanted to learn how to play guitar.

My checkbook a little lighter than before, I returned home with a new guitar and my own copy of eMedia Guitar Method 1. Now, a week later, I can actually produce sounds from a guitar that resemble something that could one day turn into music!

I was so impressed with eMedia Guitar Method 1, I wanted to learn more about the company and people who created it, eMedia Music Company

A Little Background
Adrian Burton founded the eMedia Music Company in 1994. From their own history text, Adrian “…was working long hours as a software developer for Microsoft Corp., he wanted to learn to play guitar, just as many of us have at one time or another. He visited the local sheet music store, where he purchased a popular guitar method book. He frequented neighborhood music stores for referral to a private teacher. He even enrolled in group classes at the state university. His progress, however, wasn’t what he had hoped: The learning process was far more frustrating and time-consuming than it needed to be. Books couldn’t tell him whether he was playing correctly, and private lessons were not only costly, but difficult to work into a busy schedule.”

Adrian, being a software developer, looked for a CD-ROM based learning solution, but “It didn’t exist. No product presented high-quality educational content in an easy-to-follow lesson plan, nor did any take full advantage of the rich capabilities of multimedia.”

Adrian did what any great entrepreneur would do: he filled a niche with a product. Adrian used his skills honed by years at Microsoft programming such titles as Microsoft Encarta, Bookshelf and Cinemania. He also turned to a former guitar teacher, Kevin Garry from the University of Washington, his mother Sabina Skalar, a New York City Ballet violinist, as well as some friends from Microsoft.

I had a chance to talk to Adrian, and I asked is he would be interested in chatting about himself and his company. 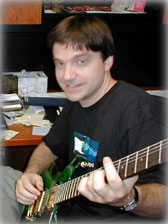 MM: You started eMedia in 1994. Before that, you worked for Microsoft. How long did you work there?

Adrian: I left my hometown of New York City in 1990 to join Microsoft and worked at the Redmond campus for more than four years before starting eMedia Music.

MM: What other software companies did you work for?

Adrian: While still in school, I founded a company to market a product called QuickTran, a file transfer utility designed to make transfers easier and faster. During college I worked for a small Wall Street software company called Spectrasoft, which after graduation placed me in a position to become an on-site consultant for Merrill Lynch.

MM: I know eMedia got its start in 1994. When was the first product released?

Adrian: The first product, eMedia Guitar Method, was released in December 1995, with a hectic drop shipment to our first major retailer, Egghead Software. Its stores across the nation had all available hands packing and sealing our boxes.

MM: You mean, Egghead Software’s employees actually boxed your product? What was shipped to them, then? Just the CD-ROM and manual? Sounds like quite a story, can you elaborate some?

Adrian: Whoops, sorry about the confusion… What I meant was that, in a rush to get our product into Egghead stores for Xmas of ’95, all us at eMedia Music spent hours packing Guitar Methods into priority mail boxes addressed to each individual Egghead store (in industry parlance, this is known as a “drop ship”). With hundreds of Egghead stores, this was quite a feat for our small team. Then, with priority mailboxes practically hanging out of the windows of our cars we rushed over to the post office 5 minutes before it closed. The folks at our small post office branch were none too thrilled to get several carloads of boxes to process that late in the day, but those boxes made it to Egghead stores in time for Xmas!

MM: Was eMedia your full time job when it first started, or did you stay at Microsoft during the “lean years”?

Adrian: eMedia has always been a full-time commitment. To really do a good job on the product requires undivided effort and dedication.

MM: What was the hardest part of starting your own business?

Adrian: Being responsible for absolutely everything, from product development to making the office phone system work. There weren’t any other “departments” to turn to for help as in larger companies. But it was also a lot of fun to be doing what I wanted to, and a great opportunity to learn a variety of new skills.

MM: How long does it take to create a new Method CD-ROM?

Adrian: It varies based on the instrument and any new technology that might have to be developed for the lessons. As a rough estimate, I’d say it takes about one year. It’s very important to have high-quality, easy-to-understand lesson material that carefully builds on previously introduced techniquesÃand that takes time to do well.

MM: Speaking of new techniques, do you have any plans on streaming tutorials via the Internet?

Adrian: Certainly, we’ve discussed that and even done prototypes. There’s a great deal of potential in that area and we do expect to eventually offer a web-based version of our tutorials.

Adrian: Fortunately, the Director platform we use works fine with OS X, though there are some audio input issues we hope will be resolved in updates to OS X.

MM: Your inspiration for starting eMedia was that you wanted to learn guitar. How good can you plan today?

Adrian: Well, I’ve certainly gotten past the basics by now and would say I’m somewhere on the intermediate level. I’ve been able to enjoy playing quite a few songs. Sometimes I wish I had more time to practiceÃthis running a business thing sure has a way of keeping you busy <g>. I’m also working on picking up bass guitar now that we’ve completed our Bass Method CD-ROM.

MM: Thanks for taking the time to answer some of my questions, Adrian.

If you are interested in learning Guitar or Bass, check out eMedia. If your just learning Piano/Keyboard, they will soon have a CD-ROM for you as well. And seeing their current crop of products, and how easy they are to use to learn, it should be well worth your time and money to pick up.