It has not been a good year at all for me, modem connection-wise. From January 1st 2001 until approximately the 15th of March, I suffered from the worst connections I have ever experienced. I went from a “normal” connection speed of 38,000 bps to a whooping 9,600-24,000bps with the worst static, disconnects and other problems. Of course, the great and powerful telephone company, despite numerous calls, complaints and pleas, switched pairs, etc., continued to tell me that nothing was wrong, I had never connected at the speeds I had been (for more then 2 years!) and that they only ensured “voice quality transmissions, not data quality transmissions.” Thankfully, through the good graces of my next door neighbor (he couldn’t even connect online at all during the same time period) who had friends in the telephone company, a “perfectly good” piece of equipment was replaced at the slick and all problems suddenly disappeared.

Now, don’t misunderstand me, I could once again connect online at 38-40,000bps but I still suffered through excruciatingly long download times, disconnects and web pages that slowly made their way onscreen at about the rate of 800-1,800KB per second, with the high number being on a really good day. So when I got a chance to try out Tracy Turner’s Mac aRa Modem Magic 5.0 modem scripts, I figured why not, it couldn’t hurt.

These modem scripts are designed for use with 56K modems and ISDN connections. Installation is simple, double click, read the dialog screens, install, restart and bam, new updated modem scripts, more than 200 installed on your computer, and your old modem scripts tucked away into the disabled Extensions folder in your System Folder in case you want to go back. Once that’s done, you simply go to the Modem Control Panel, select the modem listing that is closest to yours, go to your Apple Remote Access Control Panel, click on Connect and watch the difference.

Let me tell you, it definitely made a big difference. I actually began to connect and stay connected at 49,333bps. Web pages that normally loaded at a speed that permitted me to go downstairs to the kitchen, put on a pot of coffee, grab a cup and still get back upstairs before the page finished loading were now flying, and I do mean flying on the screen. No time even for instant coffee!

Now I know that some of you are sitting there, thinking ” Right, Russ, sure they’re flying onto the screen…” I’ll tell you, pages that took 2-3 minutes or more to load, due to graphics or pictures, are now popping up on the screen in less then 20 seconds. I’ve cleared the cache on the browsers (Netscape Communicator 4.7.6, IE 5 and Opera 5 (preview 1 & 2) reloaded and watched the pages still fly onto the screen. I’ve also switched back over to my original modem script that came with my Global Village TelePort 56K flex modem and I’m back to 2-3 plus minutes, unstable connections and brewed coffee. Switch back to Tracy Turner’s Modem Magic scripts and bam, high speed again.

I also began to time everything, such as downloads, page loading and everything I could think of to see if there was actually a difference. I downloaded a 2meg file at 6.4KB/s, total time 6 minutes, 30 seconds. I downloaded a 3.270meg file, at 3pm in the afternoon, right about the time that all kids turn on their computers at home and completed it in less then 15 minutes. A 7.6meg file downloaded in less then 25 minutes at 4:43 in the afternoon. I downloaded a 17meg file (Mac OS 9.0.4 update) in a little over1-hour. The best part of all this is that the connections are definitely stable, no more pauses in the middle of the download or partially downloaded files because the connection was lost. Regarding stable connection and no disconnects, I came home from work one day and discovered that my wife had gone online in the morning and had failed to disconnect after checking her email. The connection was still there, over 7 hours later.

When I first began to use the Modem Magic scripts, I started with the default 56K modem script, and then switched over to the Teleport V.92 script and a couple more, trying to see what worked best. Apple ARA showed connection speeds of 49,333 and I had stable downloads. But I still wasn’t satisfied and continued to switch scripts until I switched over the “No More Noise!” script, connected via the ARA Control Panel, and suddenly saw a connection speed listed of 115,200 bps. 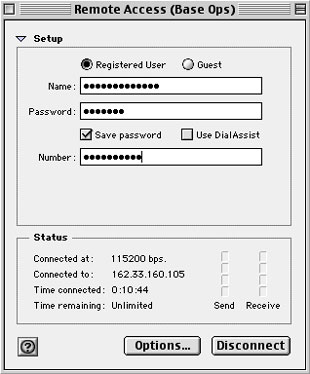 Now, before you all start jumping up and down, or emailing me that this is impossible, yes, I know that the speed isn’t actually what I’m connecting at. As Tracy wrote during our conversations regarding the modem scripts:

The speed 115200 is currently an impossibility in the laws of physics as a “connect speed in one line, though it is a true connect speed with two phone lines. Seeing this on one line is the PORT Speed setting. Modems like Global Village 33.6 or 56K seem to very greatly benefit from setting the port at 115200. To date, I’ve never seen this hurt a “Mac” connection. I have seen some really fast modems like Zoom on a Windows machine suffer dropped connections at 115200 Port Speed settings. In Windows, the fix was to close the port down to 57600 to make a stable connection.

I see a lot of Mac web pages that talk about dropping Mac connections down to 24000 baud to make the connections stable. Although it is in the realm of possibility, I run every modem I own at 57600 or 115200 Port Speed Settings, then work at creating stability and fast downloads. 57600 is also a “Port Speed setting”, as 53333 bps is the current analog speed limit in the US. The FCC got a few reports of people hearing gibberish (data bleeding through to voice) at 57600 bps transmission. This was, in fact, X2 protocol being transmitted at 57600. Flex. V.90 and V.92 PROBABLY could be transmitted at 54667 or 57600 bps by ISP’s without bleeding through to voice, but our FCC has wisely chosen caution. Unlike public highways, there is no strong, organized lobby asking for 54667 or 57600 bps analog transmission on our superhighways. Naturally, I’d love it if I didn’t hear it when using the phone.

I can tell you all that running my Global Village 56K flex modem with this script has really made a difference for me. I’m actually utilizing the modem and my system to the best possible advantage, allowing stable connections and higher download rates. In reality, the real speed is probably in the neighborhood of 53,333bps, about the max that the modem and the phone lines can handle. Oh, and the “No More Noise!” script was named that because it was designed to turn off the noise of the modem connecting.

Tracy Turner has definitely done Mac modem users a great service here, particularly those of us who do not have access to cable modems, ISDN or DSL connections. I’m using my modem to the best of its capabilities and saving time and money in the long run. I am lucky in that the problems with my phone line were corrected and that I can connect properly. Tracy offered this caveat regarding the Modem Scripts…

If someone is stuck at 24000-33600, the phone company is their most likely fix. We are not the phone company. We would get arrested if we came out and climbed someone’s telephone pole…
And after spending over two months “discussing” my phone line problems with the all-powerful telephone company, (customer service, the inside guy, the outside guy, the cable guy, supervisors, etc.) those of you who are suffering from similar problems best be prepared to fight an uphill battle. Check out Tracy’s website for some great information on modems, connections, and problems with telephone lines. Tracy offers a demo version of Mac Modem Magic scripts, which are limited to 33.6 connection speeds. You might want to check out his site just to update yourself on what is available to us modem-bound Mac users.