Strange, but sometimes items from your childhood will become almost an obsession for you when you years later. For the last three years, after a conversation I had with a friend about a Shogun Warrior Godzilla I got when I was nine, I had been trying to remember the â€œBad Guyâ€ present Santa also left. I knew it was some sort of black flying bug thing, and that I actually liked it better than the Godzilla. But for the life of me, I could not remember anything else about it.

I only had a vague memory of what it looked liked, save that it was black and had some sort of red jaws on the front. And cool wings, I did remember that.

The same thing happened once before; when I was trying to remember this yellow helicopter I got one year as well. Fortunately, I actually had a picture of myself with that helicopter, so that was easy to track down online. 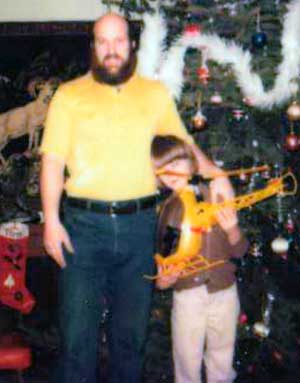 (The little guy is ME! The furry bald guy is my hippie dad. I am much taller now, but he looks pretty much the same, just greyer and a trimmed beard.)

I did not bid on the helicopter when I found it, mostly because the seller wanted around fifty bucks for it. Ouch!

Getting back to the bug thing, I spend a few nights every few months over the last three years trying to track it down. Kindaâ€™ hard when you donâ€™t even know the NAME of the stupid thing. But because I could not remember, it was bugging me to no end. I asked my parents, and of course they did not have a clue.

Well, just the other night, while looking up something totally different on eBay and not even thinking about the stupid childhood toy I could not remember, I happened to click the wrong listing. And what do you know! There it was!

The HORNETROID! I had found it! 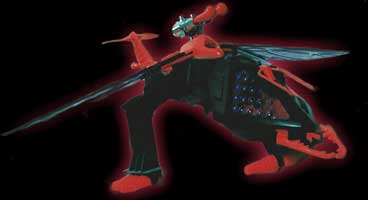 Turns out it was part of the Mego Micronauts line of toys! (Which is why I probably never remembered it, I did not care much for Micronauts, though I had two or three of them.)

So I bid on it. Did not win, as usual. Every single time I bid on something on eBay, someone usually comes along at the last second to outbid me. That is one of the reasons I hate eBay at times, too much pressure.

So anyway, I found it, as well as a cool website that gave me all the details I could ever want to know. I would like to get one someday, as long as it does not cost me too much money.

The moral, if there is one? You will usually find that which you are looking for once you stop actively looking for it. (Happened here, and with my wife!)