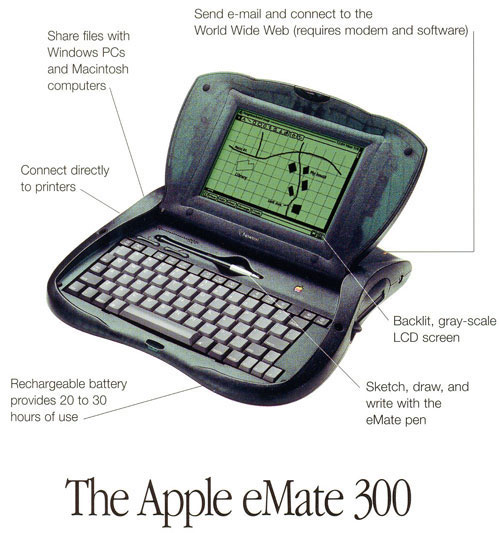 I recently had a chance to use anÂ Mate 300, the strange clam-likeÂ Newton cousin. It’s geared forÂ classroom use, but is now availableÂ to everyone. Its small, grayscaleÂ screen is backlit and touch sensitiveÂ with the included stylus. There’s noÂ doubt that the eMate is fun to use. In fact, it had to be one of the most enjoyable computing experiences I have had in a long time. This doesn’t mean that I would buy one. The experience is enjoyable, but the eMate’s practicality seems rather low.

Because the eMate was originally designed as an educational tool, some of the software included on the eMate can be used to easily connect all the eMates in a classroom together to a main teacher station. In addition, eMates and Newtons can “beam” data between each other using their built-in infrared receivers and transmitters. For ease of use alone, ‘beaming’ is a very attractive form of networking eMates.

In some ways, it’s better than a laptop. One of the major complaints of laptop owners is that the battery dies too quickly and that they are always worrying about it. The eMate lasts about 24 hours on one charge. A typical laptop will last only 4 to 6 hours. It’s also much cheaper than a laptop. The eMate costs around $800; a good laptop will cost at least twice that amount. So if someone’s main reason for getting a laptop is to take notes in a meeting or to type and save text, the eMate may be an attractive alternative.

But there are some disadvantages to owning one. One of the most apparent is that it functions differently than does a Macintosh. This must be heavily stressed to first time users. But while the interface is completely different, it’s at least very user-friendly. And perhaps important to some people is that it’s not as easy to copy files from an eMate to a desktop computer as it is from a laptop. Moreover, the software available for it is also somewhat limited and feature-starved in comparison to what we’re used to on our Macs.

For most people, the eMate is not a viable alternative to a standard Macintosh. However, since all the data can be transferred to a Mac or PC, it’s an affordable option to a laptop if you only need it to do basic computing tasks. Most people would find it better to buy a real laptop, as it is a real computer, or a Newton to take notes. The users of eMates and Newtons alike always swear by them. But most of these people bought them because they fit perfectly into their lifestyle. For most people, but not all, the eMate is just a very nice toy to complement a real computer.