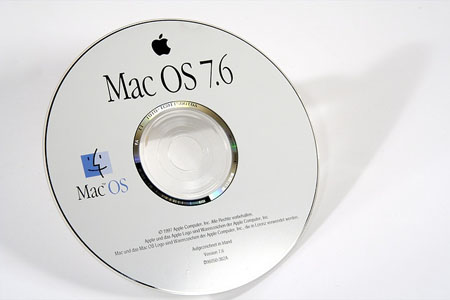 Mac OS 7.6 is finally available, and there are many questions surrounding the new release. Formerly known as Harmony, Mac OS 7.6 is the first release in Apple’s incremental system software release strategy. Yes, changes have been made, but is this release really worth it? Read this review, then decide if 7.6 is for you. It is well worth it to me, in more ways than one. One of those ways is my trust in Apple. Apple finally kept a promise, they got a system release out on time, and that is exactly what I needed.

You also get two Disk Tools Disks. The first one is for Macintosh computers with a 68030 or 68040 processor with a SCSI hard disk. The second one is for Macintosh computers with a PowerPC processor, a PowerPC upgrade card, or a 68040 processor with an IDE hard disk. You simply use the proper disk for your machine when you need to run Disk First Aid or Drive Setup/Apple HD SC Setup.

Time to Install
Now it’s time to install the software. This is usually the time that people start biting their nails. Relax! Mac OS 7.6 makes it easier than ever to install system software. I will take you through the CD installation. I did not get a chance to use the floppy disks version, but I would guess that it is just as straight forward as the CD installation is, only all the files are on 20 some floppy disks, instead of one CD.

When I inserted the 7.6 CD in my CD-ROM drive, the window opened immediately and I saw the “Install Mac OS” icon. I double clicked on it, and I was greeted by a very nice splash screen and then the 4 step installation process window. Apple recommends that you install in order, and for good reason. The 4 steps are as follows: 1.) Read important information, 2.) Update your hard disk driver, 3.) Choose a disk for installation, and 4.) Install the software.

When you click “Install the software,” you can customize your installation and select which options you want to be installed, and which ones you don’t. Open Transport 1.1.1 is not an option, it is installed automatically, and you can NOT install classic networking (Network and MacTCP control panels). OpenDoc 1.1.2 is automatically installed, as is QuickDraw 3D and MacLinkPlus 8.1, unless you specify what you want in a custom install. If you want to minimize the extra stuff once the software is installed, take the time and do a custom install, it’s worth it. NOTE: Because of a problem with the CFM-68K Runtime Enabler extension, OpenDoc and Cyberdog will not run on 680×0 Mac’s, and therefore, will not be installed. Apple is supposed to ship a fix to the extension soon.

The installer then automatically checks your hard disk, and repairs any problems if it can. If you want to do a clean install (install a new system folder) then you can easily check that box also. After all this is done, the “Install Mac OS” launches the Apple Installer 4.0.6, a new version that lets you easily do a clean install by selecting it in an options window. Once you are all ready to install, click the “Install” button and you are good to go! See, I told you it wasn’t that hard! Mac OS 7.6 will leave around a 60mb footprint on your hard drive for minimum install, around 120mb for maximum.

Extensions Managed
Probably the biggest and most talked about change in this new system is the revamped Extensions Manager (version 4.0), which offers much more information on the contents of the System Folder. The new extensions manager includes Mac OS Guide (Formerly known as Apple Guide) support, and lets you view control panels, extensions, startup and shutdown items, and system folder items by “On/Off,” “Name,” “Size,” “Version,” or “Package.” It also has Apple’s “greyscale copland” appearance, which is supposed to be delivered in Mac OS 7.7 (code named “Tempo”) due later this summer. Other features include item information, which gives you information about a control panel or extension when you click on it.

Other Tweaks & Updates
Mac OS 7.6 also includes a “revised” virtual memory system, which, instead of speeding my machine up like Apple claims, actually slowed it down. Anything referring to “Macintosh” has been changed to “Mac OS.” Under the Apple menu, instead of “About this Macintosh…” is “About this Computer…” The classic “Welcome to Macintosh” screen that used to appear at startup has been replaced with “Mac OS” startup screen, and it now reads “Welcome to Mac OS.”

I have also noticed that after a crash, system bomb, freeze, whatever, the system reboots much faster. Mac OS 7.6 also fixes a handful of bugs, as my crashes and freezes have been reduced dramatically. Any crashes that I do get are due to America Online’s “new and improved” version 3.0, or Netscape Navigator, which should be renamed “crash my Macintosh.” Now, back to the review…

Another feature that I have found useful is the enhanced screen shot feature. If you want to take a screen shot of just one portion of your screen, press Command-Shift-4. You will see a “crosshairs” cursor which you can click and drag to define what region you want saved in the screen shot. Press the Caps Lock to toggle between the crosshairs and a “bullseye.” Clicking on a window with the bullseye makes a screen shot of only that window. Cool!

The Summary
By the length of this review alone it’s obvious that I really like this upgrade, . I could go into every feature included, (and I would, believe me!) but we have to keep the issue under 10 Mb. Since installing Mac OS 7.6, the system on a whole is faster and much more stable. The new installer is great, as is the new extensions manager, and bundling everything up into one package was the right step for Apple. My recommendation? Buy Mac OS 7.6. All 3 of my Mac’s benefited from it, and chances are yours will too.