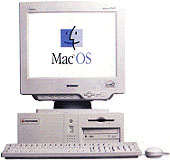 If you’re looking to buy a new Power Mac, but you really can’t afford the pricey 604e processor, you may really want to consider what Power Computing has to offer! Based on the Alchemy architecture, the PowerBase 240, although the price doesn’t show it, is anything but low-end! With a 603e processor running at a blazing 240mhz, the PowerBase 240 is giving 604-based desktop systems a run for their money!

What’s Inside
The PowerBase 240 features a PowerPC 603e processor running at 240Mhz, a 256K Level 2 cache, 16 Mb of EDO (Extended Data Out) RAM, 2 Mb of VRAM, a 1.2 GB IDE hard drive, and an 8x CD-ROM drive. This also includes the keyboard and mouse. The PowerBase also comes with a great first-rate software package, making this computer a steal at $2095.

The PowerBase 240 is based on the Alchemy architecture, which Apple uses in its Performa 5400 and 6400 models. However, Power Computing has made significant changes in the design, eliminating some of Apple’s features and giving greater flexibility in the long run. First, the processor is on a removable daughtercard, not soldered on to the motherboard like Apple’s models. When a faster processor becomes available, users have the option to replace their processor only, while 5400 and 6400 users would have to replace the whole logic board, which can prove to be very costly. This is one of my favorite features.

One place that the PowerBase does fall short is the hard disk. The 5.25-inch Quantum BigFoot drive was terribly slow, and when I was editing sound with Sound Edit 16 and playing QuickTime movies, the performance really suffered. When I hooked up an external SCSI hard drive, the performance was excellent. I feel that Power Computing really made a bad move here. It just doesn’t make sense to put a slow hard drive in a fast machine.

Expansion Options
Unlike the one slot 5400 and the two slot 6400, the PowerBase includes 3 full size (12-inch) PCI slots. Where did Power Computing find the room, you may ask? The PowerBase lacks the Communications Slot, the slot for the Apple Video System card, and the TV-tuner bay, all included on the 5400 and 6400. I feel that this was a very good move on Power Computing’s part – offering industry standard expansion options, instead of old Performa and LC technologies.

Pricing and Availability
The PowerBase 240 desktop model retails for $2095, while the tower case retails for $2195. More information is available on Power Computing’s Web site, at http://www.powercc.com.

The Summary
Well, what else can I say? I’m very, very pleased with the PowerBase 240. It’s a very flexible computer that will work for a wide range of users, from the home user to the business professional. Considering its numerous technical advantages and aggressive pricing, the PowerBase looks like a much better buy than Apple’s 6400 series, and is now presenting a challenge to Apple’s 7200 and 7600 sales. The 603e was never considered to be powerful enough for a business computer, but Power Computing has changed that. The value in this machine far outweighs any of its pitfalls. If you are a penny pincher, and you’re looking for the best price/performance ratio, your answer lies in the PowerBase 240.