For those of you who aren’t familiar with Guy Kawasaki, (where have you all been?), a little background info is important. Guy Kawasaki, one of the most famous evangelists for the Macintosh since 1983, recently rejoined the company as an Apple Fellow, and has improved communication between Apple customers, developers and Apple staff. Mr. Kawasaki is a well known author, businessman, former MacWorld columnist, consultant, dream salesman, well…you get the idea. 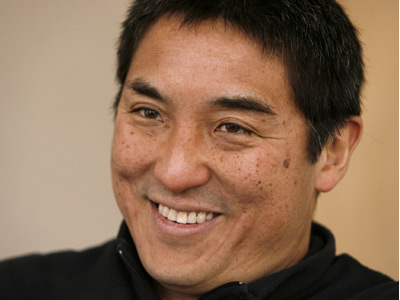 His new job of “Apple Fellow” at Apple’s main office in Cupertino, California, is to “spread the good news” about Apple, the Mac, the Mac OS; basically, to let the world know that the end of Apple is not imminent, contrary to the everyday rantings of the unbiased press and media. Through the use of the EvangeList and the MACWAY, he has been providing “good news” to those who have grown weary of the PC pushers. For those of you who have yet to sign up, I have included the pertinent information at the end of the article so that you can immediately sign up for the MACWAY digest.

I must tell you all what a pleasure it has been to communicate with Mr. Kawasaki during the course of this Email interview. The beginnings of this interview started at approximately the same time that all hell broke loose at Apple. Mr. Kawasaki consented to the interview, and even through the turmoil that Apple, he and everyone else were going through, he continued to communicate. (Even when his in box devoured part of the interview for a light snack)

Originally this interview started out much longer then what you will soon read. Mr. Kawasaki, through years of experience, requested a somewhat shorter interview so that he could still do his job and spend some time with his family. So, sit back, relax, and enjoy a visit with Guy Kawasaki.

My Mac: After being away from Apple’s headquarters for several years, you’ve returned as an “Apple Fellow.” With all the changes that have just taken place, where do you see Apple going and what changes would you make?

GUY: I remain optimistic in Apple’s future–indeed, I would not have returned if I didn’t have this belief. After all, I’m neither dumb nor a masochist–I hope anyway. I see almost all of the computer industry going headfirst into the Internet. I think Apple should do this too, but while maintaining the “art” of designing hardware and system software.

The changes I would make at Apple are pretty basic: manufacture less models, ignore markets where we cannot uniquely provide benefits of great value to the customers, and free our employees to do the great things they are capable of.

My Mac: Apple and its on-line system, eWorld, have apparently finally realized that the Internet is the new playing field for the computer industry. Where do you see both going as far as the Internet is concerned and do you agree? (This interview was completed at the end of February, prior to the demise of eWorld)

GUY: You may be too kind. I still believe that online systems can exist today, but they better do something very special vis-a-vis the Internet. eWorld was basically bushwhacked by the Internet, and now it has to be either a great Web site or gone.

My Mac: What gave you the idea for MACWAY and the EvangeList, and what has been the response of Mac enthusiasts?

GUY: When I first returned to Apple I started a mailing list for developers called Semper Fi. This was a many-to-many list, and I noticed many people just wanted to get ammunition to fight for Macintosh. I saw the power and utility of listservers and decided to start one for Macintosh evangelists. Now there are 22,000 people on this list, and it’s been a tremendous success. I have documented cases of people saving their friends, relatives, and associates from “making a mistake” if you know what I mean.

I hope your readers will join. All they have to do is send an email to
<Evangelist@macway.com> for information.

My Mac: What can the rest of us (everyday users, e-zine producers, Mac enthusiasts) do to help?

GUY: Here are some things:

10. Spread this URL <http://www2.apple.com/whymac/>
9. Wear Apple garb all the time
8. Reaffirm people using Macintoshes in planes, trains, and coffee shops, etc.
7. Inform your friends and family about what’s really going on
6. Get online and answer questions
5. Make sure the Macs on showroom floors are running properly
4. Ask store clerks why there isn’t more Macintosh software
3. Write to publications that slam us
2. Donate your old Macintoshes to schools, churches, and other NFPs (not for profit
groups)
1. Get people to join EvangeList

My Mac: Being as involved as you have with the Mac for such a long time, maybe you would let us know what is your favorite Mac and why.

GUY: I never met a Macintosh I didn’t like.

My Mac: What programs (commercial/freeware/shareware) do you consider must haves for the Mac? (Of course, Emailer goes without saying)

GUY: I live in Claris Emailer because I get 300 messages a day. I’d also consider necessary: ClarisWorks, TouchBASE, DateBook, Thunder 7, and Tex Edit.

My Mac: What are your future plans – programs, books, projects?

GUY: Right now I’m just dedicated to two things: my family and evangelizing Macintosh–in this order. Believe me, they are more than a full-time job.

“One person with a belief is equal to a force of ninety nine who only have interest.” John Stuart Mill