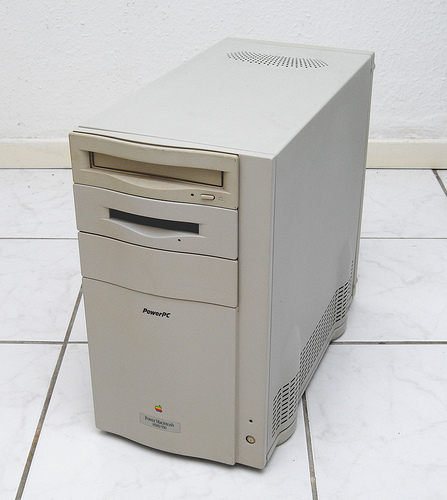 This is talking awesome power. The Power Mac 8500 is not only the most complete and feature-packed comnputer Apple has ever made, it is also the best multi-media platform apple has ever made!

The 8500 uses the same case used in the power mac 8100 and the Quadra 800 series. One downside to this case design is that to add RAM, you need to perform major internal surgery, pulling all the expansion cards, cables, and removing the logic board to get to the DIMM Slots.

DIMMS, which are 168 pins wide, instead of 72, are used in the 8500, as well as in all the other second-generation power macs. DIMM is short for-Dual in-Line Memory modules, instead of SIMM-SINGLE inline memory module. The RAM is expandible to 512 Megabytes via 8-64 megabyte DIMMS, though this will set you back about $16,000!

The 8500 also uses the new PCI architecture, as do all the other second generation Power Macs. This is why a logic board upgrade for the 8100 and the Quadra 800 series may not be the best upgrade solution. If these owners have invested in SIMMs and Nu bus cards, they will be better off buying a new 8500 and selling their old machine.

You can buy the 8500 with either a 1 or 2 Gigabyte Hard Drive, with the 2 GB configuration providing faster video. Both models have 16 megs of RAM, an Apple 600i Quad-speed CD-ROM Drive, 3 PCI expansion slots, the Apple Plain Talk microphone, and a 256 L2 Cache, also DIMM-based.

The 8500 has all the usual Mac portsâ€”SCSI, ADB, 2 serial, and 2 choices of Ethernet. Although there is no AV in its name, the 8500 has a bevy of AV ports, including S-Video i/o and Composite Video i/o. There are also two pairs of RCA jacks so you can use the normal stereo i/o ports for speakers and a microphone, and still have a video imput devise such as a camcorder connected to the RCA jacks.

Another great feature is the Energy Saver Control Panel that ships with System 7.5.2. This lets you put the computer to sleep, as well as spin- down the hard drive after a period of inactivity. The computer will wake up when there is an incoming fax or modem call. Also, the 8500 ships with Quick Draw 3D, and Quicktime Conferencing software.

The downsides of the 8500 are the Open Transport problems indigenous to System 7.5.2. The fix Open Transport 1.1 should solve the problem, and will ship in February. Printing is also a troublesome on the 8500, as well as the other Second-Generation Power Macs. The fix to this is an extension called 7.5.2 printing fix, found in any Direct from Apple fourm on any online service.

One other complaint is the System Folder, with its barrage of Extensions and patches. System 7.5.3, due to be avalbale mid-January, will only make this problem worse. Hopefully Copeland, Due to ship by mid-1996, will sport a neater System Folder.

At bottom, the problems with the 8500 are minor. With the fixes for Open Transport and for printing, and with Copeland on the horizon, the 8500 promises to give you state-of-the-art power computing for years to come. The 8500 will be best for graphics designers and artists, who need the AV capabalities. If you don’t need the S-Video out, or no AV capabalities at all, check out the Power Mac 7500 an 7200. 4500 Dollars is nothing to take lightly, but with the 8500, you’ll get every penny’s worth.
-Adam Karneboge