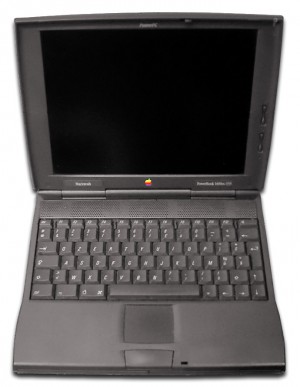 Since the introduction of the PowerBook 5300, Apple has lost all the respect that it had ever gained in the laptop market. Software conflicted with it. The batteries caught on fire, forcing an embarrassing recall. Overall, the 5300 was a total disaster. That’s why I couldn’t be more delighted to see Apple release the PowerBook 1400. Sure, the 1400 is not the speedy PowerBook everyone hoped for, nor does it solve all the problems with the 5300, but it is stable, it is safe to buy and use, and hopefully, will gain back the respect that Apple lost.

The rear of the 1400 shows some changes, too. Although the ADB, serial, and HDI-30 SCSI ports are still behind an improved port cover, the stereo in and out ports are no longer hidden behind the port cover, making them much more useful. One of the less noticed features is the presence of an infrared transceiver, yes, the same one that was included with the 5300. It is still slow, and still isn’t IrDA-compliant. Apple has also replaced the flimsy 5300 power connector, with the more solid Duo power connector.

Also under the port is the 1400’s expansion slot, capable of accommodating a variety of cards, including an Apple video-out card or a host of 10BASE-T Ethernet cards. Another improvement is the two RAM slots, allowing the 1400 to have up to 64MB of RAM. Speaking of internal slots, the 1400 is the first PowerBook since the 500-series to have an upgradeable processor option, via the processor-daughtercard connector, a huge improvement over the 5300!

Not perfect
No computer is totally perfect, and the 1400cs is no exception. It still has the “boxy” look that the 5300 had, and it weighs 6.7 lbs, w/o the CD (7.0 w/ the CD) – not at all light for a laptop computer. But these are totally minor, and should not be major factors when considering a purchase of a 1400.

Probably the biggest drawback to buying a 1400 is its lack of speed. Even though the processor runs 17Mhz faster than the 5300, it still received a processor score of 12, using MacBench 3.0. This is due to the slow 33Mhz bus, and the lack of a L2 cache, an option that has really been killing Apple lately. Only the high end PowerBook 1400c/133 ships with a L2 cache, and even that is only 128 Kb. This is a problem, but it is forgivable because the processor is upgradeable.

Pricing and Availability
There are 4 configurations in the 1400 series, and unfortunately, I only had the chance to use two. The prices range from $2,400, for a 1400cs/117 with no CD-ROM drive, to $3,999, for the top of the line 1400c/133. Although the 1400’s weren’t shipping at the time this review was written, they should be shipping in limited quantity by the time you read this.

The Summary
I have truly enjoyed my experience with the 1400cs. I loved the bigger screen, the CD-ROM drive, the enhanced trackpad, and the ease of expansion. I experienced near-perfect performance and reliability. If you need a faster PowerBook that is compatible with 5300-style devices, wait for Apple’s new PowerBook 3400 series (code-named Hooper) due out early next year. But if you’re looking for a laptop that is multimedia savvy, has a bigger screen, and most of all, is stable, the 1400 may be just what you have been looking for.