In the first half of this article I looked back on some of Apple’s best offerings, including products as diverse as ClarisWorks and the PowerBook 500 series. One of the nice things about Apple in recent years has been that most of their products have been good, and some very good indeed. There really haven’t been any real turkeys, though a few have been flawed in some way, for example the noisy G4 PowerMacs. Others have been unsuccessful rather than bad, the G4 Cube being the classic example of this: a machine that while well designed and constructed simply didn’t have a large enough market to be a particularly profitable or long-lived product. The current iMac and iBook lines in particular include some of the most strikingly attractive consumer-level computers yet produced, yet tote enough power under the hood to be attractive to small office users too. They are, in short, great all-rounders that stack up well against comparably priced Windows PCs.

Such computing nirvana hasn’t always been the case though. During the dark days of the Michael Spindler – Gil Amelio era Apple all too often produced machines that were plain to look at and underpowered. Such machines seemed most prevalent at the consumer end of the market, the exact same market Apple seems able to steer products through so successfully. Pitched against lower-priced PCs that offered faster processors, better graphics cards and the ability to run a wider range of game and entertainment software, Apple haemorrhaged market share at this level throughout the early and mid 1990s. Professionals fared better, buoyed up by the development of the PowerPC processor and a succession of top-notch portable computers including the 180, the 500 series and then the first Apple portable to really perform like a Power Macintosh, the 3400. But even so, Apple still managed to throw some junk the way of the professionals and power users too; and once in a while, as with the case of the original iMac “hockey puck” mouse, they still do. 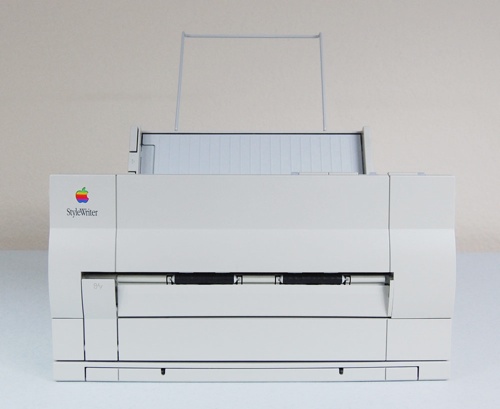 The StyleWriter was Apple’s first inkjet printer, and compared with the laser printers of the time offered home and small office users a reasonably fast, high quality printer a healthy step up from a dot-matrix printer like the Image Writer. The problem with the StyleWriter was that it was ugly, oversized and made up of lots of bits that could get broken off easily. The power supply was a huge external lump that had one long cable to the main supply and then another to the printer, and the paper feed tray appeared to be made from an old wire coat hanger bent into shape. The StyleWriter was also decidedly vulnerable to getting jammed thanks to a relatively open design that let things like paper clips slip between the rollers or whatever. Setting up and installing the StyleWriter was a snap though, and they were quite popular little machines. But compared to the redesigned StyleWriter II, the original StyleWriter looks primitive and clunky.

The first Mac I ever bought was a PowerBook 150. It contained a processor that was already beginning to show its age in 1994, the Motorola LC68030. Running at 33 MHz it was quite fast enough to run ClarisWorks and MacDraw just fine but even if you wanted to try running something a bit more demanding, like a graphics application or a game, you probably couldn’t. For a start the built-in monitor was a rather fuzzy passive matrix greyscale LCD showing just four shades of grey. This can’t really be said to be a criticism of the 150 though; at the time LCDs were expensive, and for a budget-priced machine the screen was pretty typical.

No, what really hurt the 150 was its lack of expansion. We’re not talking about PC card slots or processor upgrades, but the basics: No ADB port for a mouse or keyboard, no Ethernet port, and no video out. A combined AppleTalk/Modem/Printer port meant you could either access a slow AppleTalk network, or use the modem to connect to an online service, or print a document to a StyleWriter or other serial printer, but not all at the same time. There was a SCSI port though, admittedly a non-standard one, so with the right adapters you could plug in scanners, external hard drives and optical disk drives to back stuff up to. But SCSI drives in particular were expensive back then, and were apt to be temperamental with PowerBooks in particular. Unless you added a “terminator” to prevent corruption of data moving between the laptop and the external drive, all sorts of bad SCSI voodoo could go down. Really the only simple way you could move files between a PowerBook 150 and any other machines in your home or office was by putting them on floppy disks. 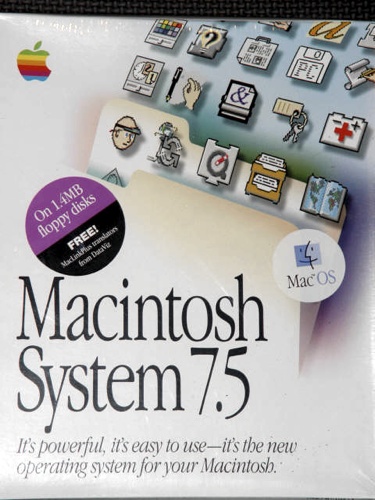 System 7.5 should have been remembered with much fondness; after all it was a major overhaul of the operating system comparable in scale to the changes between OS X 10.1 and Jaguar. The problem with 7.5 wasn’t what it offered but that it was ridiculously buggy, and that it was released at that moment when software became big (there were around twenty disks for the full install of 7.5.0 if you included things like QuickDraw GX). This meant that installing 7.5 onto the average Mac without a CD drive took a very long time. Updates needed another dozen disks. And there were many of those. First 7.5.1, then 7.5.2, and then 7.5.3; oddly, 7.5.4 was so bad it wasn’t even let out of Cupertino, but there was a 7.5.5. At that time online services were still pretty slow, so downloading these updates could take all night, and more often than not something would go wrong and you’d come downstairs to see the machine had given up or Apple had disconnected you because there were to many users. If you were unlucky enough to be using a Performa 6300, then the machine had probably crashed as well. Eventually Apple released 7.6, codenamed Unity, which rolled all these updates into one and turned 7.5 into a stable, usable system. But the damage had been done, and by now everyone was looking towards System 8 with its greater proportion of PowerPC code for better performance on the newer machines and a swish new “platinum” look. 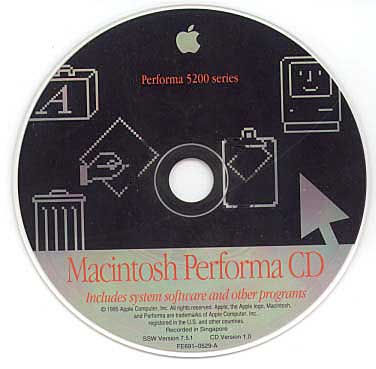 Buy a Windows PC and the chances are it’ll come bundled with a tonne of software, some useful, some less so. Many computer retailers use the software bundle to sell the computer, marketing a give machine as ideal for gamers, for digital photographers or for students. This symbiotic relationship between the hardware manufacturers and commercial software developers has been very good for the Windows platform. Obviously Microsoft plays a big role here, offering applications like Explorer and the Office Suite, but smaller companies are important too, as with Jasc Software and it’s popular graphics program Paint Shop Pro. Apple Computer has never enjoyed this sort of relationship, and the bundle of software that comes with a new Macintosh has tended to be limited to software developers at Apple or a closely allied company, such as Claris. That isn’t as much of a problem nowadays as it was in the past thanks to a resurgence in the quality and diversity of Apple’s own programs, including products like iTunes, Safari and AppleWorks that are at least as good as anything in the Windows marketplace, and often far superior. Buy a consumer-level Mac and you’ll also get some of the best productivity and Internet software out there. This wasn’t always the case.

The Performa line of computers was Apple’s attempt at creating a distinctive brand for the home user market separate from those targeted at professionals. In practise what seemed to happen was that Apple took a successful Macintosh design, stepped down its performance and specification to cut costs, and then threw in a bundle of whatever programs it could find and thought might be attractive to the home user. The hardware part of this strategy will be looked at later in this article; my gripe here is with the software. More than anything else the software bundle highlights the difference between the Apple before Steve Jobs’ return and afterwards. For a start the bundle tried to match the sorts that came with contemporary PCs rather than playing to the Mac’s particular strengths. A typical bundle of CD-ROMs might include a game or two, something for learning a foreign language, maybe one for teaching typing skills, and then some sort of encyclopaedia. Rarely would the companies that developed these programs have any sort of special relationship with Apple or Mac users, a notable exception being Broderbund with their best-selling game Myst. Often the software would feel cheap (probably because it was) and in many cases didn’t run too well on the low specification Performa it was supplied with (especially true with the games).

Another issue was the stuff Apple left off the hard disk or out of the stack of CD-ROMs that came with the machine. ClarisWorks was usually included, but notable exclusions were programs that could really have shown off what the Mac was capable of, such as FileMaker, HyperCard and MacDraw. Would it really have killed Apple to include these in the bundle? If they’d included older versions of these programs that were currently being sold, but with a special upgrade rate, they might easily have persuaded home users to extend their Mac computing into the office. 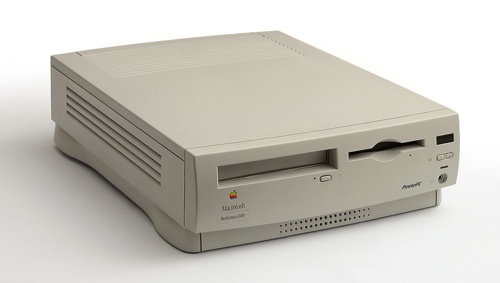 Having dispensed with the software bundle as being weak, attention now needs to be turned to the hardware. Again, the gap between the low-end of the current Macintosh line-up and that of ten years ago is profound. Whereas clever design is the watchword now, back then the engineers were asked to produce machines at as low a cost as possible. Often this meant reducing the speed of the bus or the processor, other times restrictions were placed on how much memory could be installed or on possible upgrade paths for things like expansion cards and optical drives. SCSI hard drives were replaced with slower IDE ones to cut costs but adding to their instability with external SCSI chain devices like scanners. There were a number of the Performa 6300 and all-in-one 5300 machines floating around the Natural History Museum when I began my Ph.D. there. They were incredibly unstable machines, apt to crash several times a day, although some of that might have been the fault of System 7.5 (q.v.). A contraceptive company produces a desensitizing condom called the Performa that prevents the user getting things done too quickly. Much the same thing could be said about the Performa computers.

In a sense though, the low-end machines were always fighting with one arm tied behind their backs. While cheap PCs could take full advantage of budget price peripherals, because of the proprietary ADB and serial ports, the equivalent Macs were locked into the smaller, and consequently more expensive, Apple-only market. So even if your Performa cost a similar amount to a Windows PC of similar quality, you’d still expect to pay fifty percent more on things like printers, joysticks and other peripherals.

For more fun, read “Road Apples” over at Low End Macs and “The 10 Worst Macs Ever Built” at Insanely-Great.Com. And if you have some bad memories to share why not visit the Forums and share them with us.